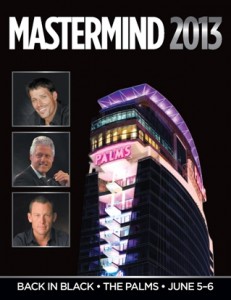 I took the opportunity to attend Steven Marshall’s Mastermind 2012 conference in Las Vegas.   Not only does Steven put on some of the best conferences that I’ve ever been to, the lineup of speakers and presenters was phenomenal.

One of my long term favorites is Joe Stumpf with By Referral Only.  He had some exceptionally good information, as always, but the attendance in his breakout room was pretty sparse.  That’s understandable, because Joe is better known in the Real Estate world than the Mortgage Industry and this was a very mortgage-specific event.

What was cool, though, was that Joe set up a live-stream and had hundreds – or maybe thousands – of people from all over the world attending via webcast.  Now that’s a great use of technology.  Plus, as he was presenting he would address the webcast crowd and have them communicate via social media channels like Facebook and Twitter.

What a great example of using social media to get your advocates spreading the word.  I learned a lot just taking in how he and his team put it all together, let alone the nuggets I was writing down.

I would have needed a recorder to get all the details, but here a few gems I picked up.  Enjoy!

Maybe you aren’t feeling like you would get enough value from our meeting…..

What if you knew there was $1,000 that you would get by simply meeting with me?

Many of my clients have experienced many thousands of dollars in extra (savings, commissions, etc.) by using the strategies I am willing to give you during our meeting.

Hot Words – The most important words of the person you’re talking to.

7 Questions to Get Their Hot Words

Resonate – Words that connect at a deep, emotional level

People will present their situation as fact.  You must change their facts into their beliefs.

Objection: “I want to think about it.”

Response: What I hear you saying is you believe you can’t make a decision now because….

Use 3rd party voice to describe or overcome objections