There’s a lot going on in the real estate and mortgage world these days.  The competitive landscape is changing faster than ever before.

Lots of people in the industry are wondering how they can stay alive with the onslaught of big money and big corporations getting into the game in a way that we’ve never seen before.

Zillow bought Mortgage Lenders of America and immediately inserted themselves into the mortgage origination space in a big way.

And they are instituting “Instant Offers” as their primary real estate business model going forward becoming their own advertising client’s direct competitor!

(After building their business, website traffic and name off the backs of all of the traditional agents and loan officers in the marketplace paying for it!)

But Realogy agents shouldn’t get too excited.  Because they are the one’s paying for it out of their commissions. (And only 11% of their agents “qualify to participate” according to themselves)

And at the end of the day, this partnership isn’t about helping individual agents anyways.

This deal as well as all of the iBuyers that are tearing through the industry is about the corporatization of the real estate industry. 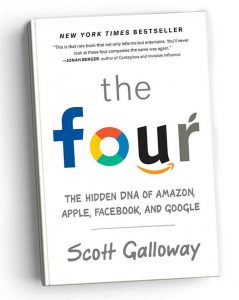 I recently read a book called “The Four” by Scott Galloway that details how Amazon, Facebook, Apple and Google became the four biggest and most profitable companies in the technology space.

I found the part about Amazon most relevant to the real estate and mortgage industries.

See, the reason Amazon was able to grow into the single largest online retailer on the planet wasn’t because they were the best retailers…. or most personable service…

Heck! They didn’t even have to be profitable for the vast majority of their existence and rise to the top!

It was because of one very important thing.

Something individual agent’s can’t compete with.

Not a single agent in the entire country can compete with this very important thing.

And that thing is SCALE.

And Jeff Bezos’ masterful storytelling and his ability to keep investment capital flowing into Amazon regardless of their massive losses year after year changed the retail landscape forever.

And not just the online landscape either!

Think about all of the local retailers and now even big box retailers going out of business.

Why? Because it’s easier to shop on Amazon and have everything delivered!

Make no mistake, this trend is exactly what’s happening in real estate with everything I wrote above.

And this deal with Realogy is part of the fastest growing part of Amazon.

Did you think Amazon finally got massively profitable in 2016 because retail got better?

Their digital services business was the most profitable part of their business in 2018 for a total net profit of $10.1 Billion Dollars!

And want to know the fastest growing part of their business last year?

“Other Services” which includes ADVERTISING!

That segment alone grew 95% in 2018 and is predicted to exceed their digital services business by 2021.

Want to know what’s going into that growth?

Advertising income from the real estate and mortgage space…

So what should you do?  How can you compete?

You have to change the game.

You have to do the things that big companies can’t take away by outspending you.

You have to become a marketing ninja.  A guerilla.

I’m going to go over the details of exactly how you can do that.

And if you take my advice you will win.